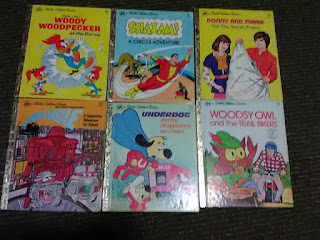 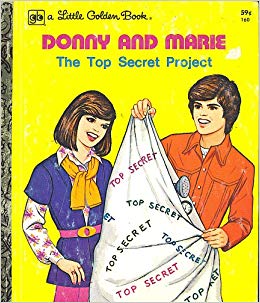 Donny and Marie : The Top Secret Project
by Laura French
Illustrated by Jan Neely
I used to watch the Donny and Marie Show as a kid and I had this one book about Donny thinking he could build a robot. It doesn't turn out quite the way he wanted and so Marie and their little brother try to outdo him. 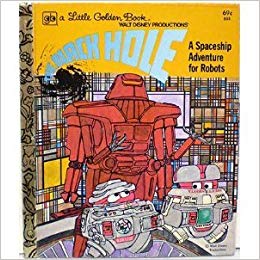 The Black Hole A Spaceship Adventure for Robots
by uh, well my book doesn't give any credits.
From the Disney movie that I enjoyed it focuses on the robot characters of V.I.N.CENT and Old B.O.B. as they explore the spaceship and try to avoid being caught by Maximilian. A fun little story even if it doesn't actually fit in the with story from the film.

Underdog and the Disappearing Ice Cream
by Mary Ann Forn
Illustrated by Jason Studios
There's no need to fear Underdog is here. So his catch phrase went. An entertaining story. Ice cream disappears, Polly disappears, aliens show up and Underdog saves the day. 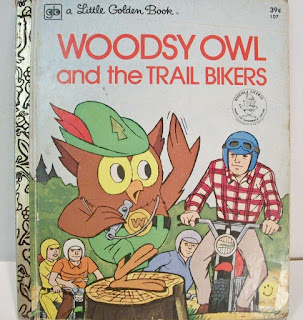 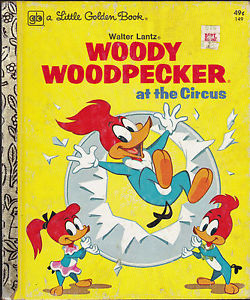 Woody Woodpecker at the Circus
by Stella Williams Nathan
Pictures by Frank McSavage
Woody along with Splinter and Knothead(niece & nephew I believe) decide to join the circus. Hilarity ensues. 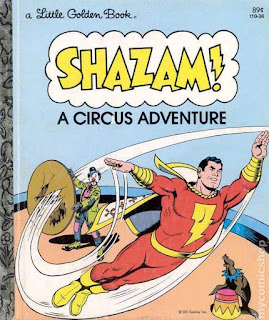 SHAZAM A Circus Adventure
by Bob Ottum
Illustrated by Kurt Shafenburger
And for our last book, how about another trip to the circus. This time however the circus train is delayed so Captain Marvel and Mary Marvel put on a circus themselves. Because real super-heroes aren't afraid to put on clown makeup and get hit in the face with pies.

Well, I hope you've enjoyed this look back at a few of my Little Golden Books. If so, not to worry I have more and will be posting about them in the future.
Posted by ShadeofJeremy at 7:10 PM